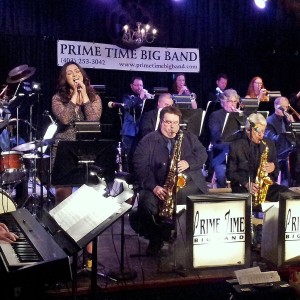 “One of the best big bands in Canada” – Kodi Hutchinson, A Time for Jazz, CKUA Radio

Founded as a rehearsal band for professional musicians in 1994, calls soon started coming in for the band to play for live audiences at special events and festivals.

Prime Time is celebrating its 21st year and its 15th season of Saturday brunch concerts at the Ironwood Stage & Grill. The band performs a minimum of 21 concerts a year and entertains a minimum of 120 people at each of their concerts.

The big band is renowned for its first-rate musicianship. Its membership is made up of many of Calgary’s top musicians, and almost all of the city’s most veteran jazz players.

Prime Time is made up of 20 musicians and includes five saxophones, four trombones, five trumpets, one piano, one bass, one drummer, one percussionist, one vocalist and one conductor.

Calgary’s Ironwood Stage & Grill, a venue with an international reputation for its presentation of live music, was receptive to having a band on Saturday afternoons, Dave Jones says. “Within six months we had developed an audience and the concerts started paying for themselves.”

Prime Time is likely the only band of its kind in Canada to have a regular standing gig.

Band leader Dave Jones has a home library boasting charts for 4,000 songs in the band’s current library. Jones selects 15 songs for each concert. The band can and usually does go a full year without repeating a selection.  Prime Time’s repertoire spans time and styles from the Big Band era to today’s contemporary pop, jazz, and adult/contemporary genres.

Prime Time’s signature encore tune is Sing, Sing, Sing. Says Dave Jones: “We’ve tried different versions and I even tried changing the encore to give the musicians a change, but people demanded it; they phoned me saying, ‘it leaves us happy and bouncing out of the club.’ How can you argue with that?”

Prime Time draws a loyal audience and has a strong following. Their combined enthusiasm and support helps keep the big band genre alive.

In 2006, Prime Time Big Band recorded and released its debut CD, For Our Friends, thanks to audience fans who funded it.  More than 5,000 copies have sold.