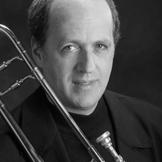 A member of Prime Time since 2001, Dave has been the Principal Bass Trombonist with the Calgary Philharmonic Orchestra since 2002. He served for eighteen prior seasons as Assistant Principal (tenor) Trombonist, having moved to Calgary to join the CPO in 1984. In 2004, he took a two year leave of absence from the CPO and Prime Time to return to his native city of St. John’s where he served as Professor of Low Brass in the School of Music at Memorial University of Newfoundland (MUN). While in St. John’s, he was featured as a soloist with the Newfoundland Symphony Orchestra, MUN Concert Band, Toronto’s Hannaford Youth Band, and in four solo recitals at the School of Music. He also adjudicated at regional music festivals in Newfoundland and Labrador.

Studies in music include the completion of Associate and Licentiate diplomas in Piano and Cornet performance from Trinity College, London while still in his teens. He also studied music at MUN, University of Toronto, and Indiana University, where he received the Master of Music degree in Trombone Performance.

He has participated in the recording of over twenty commercially released CDs in various genres, most recently on a session for Calgary’s own Jann Arden. In addition to his busy symphony, opera and ballet schedule, he has taught at the University of Calgary and Mount Royal College while maintaining an active freelance career performing on alto, tenor and bass trombones, euphonium and tuba. He has performed in theatre productions of Chicago, Cats, Cabaret, Evita, The Wizard of Oz, The Sound of Music, South Pacific, Finian’s Rainbow, West Side Story and Man of La Mancha. Since 1994, he has been lead trombonist with the Calgary Stampede Grandstand Orchestra, performing in the 2006 show on bass trombone and tuba.

Dave is married to CPO bassist, Trish Bereti Reid and they are the proud parents of a three-year-old son, Sam and a one-year-old daughter, Sophia.