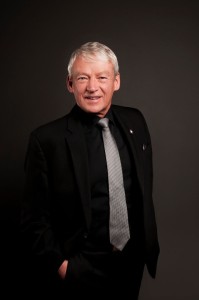 Captain Dave Jones formed Prime Time Big Band in 1994 after serving in the Canadian Forces Music Branch as a trumpeter and conductor for over
28 years. The band is comprised of Calgary’s top professional musicians and rehearses weekly .

The band has a current library of more than 4000 compositions including Big Band Swing , BeBop , Latin , Contemporary Jazz Standards , Popular Tunes and Rock . It also has a dance library of over 1000 arrangements of all styles from the 1940’s to the present day.

Over the past 23 years , Prime Time Big Band has enjoyed a “ steady “ Saturday afternoon two hour jazz gig at The Ironwood Stage and Grill in Calgary , Alberta .
Big band jazz from the 1940’s to the present day including hits from the Buddy Rich Big Band , the Bob Florence Big Band , the Stan Kenton Band , the Count Basie Big Band , the John LaBarbera Big Band , Gordon Goodwin’s Big Phat Band and other big bands are featured .