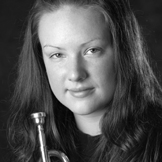 “Leanne began studying the trumpet in Calgary, AB, and throughout grade school studied both classical and jazz playing with local professionals.

Leanne has had the pleasure of performing with many artists and groups including Randy Brecker, Shelly Berg, Bobby Carcasses and the Calgary Philharmonic Orchestra, as well as working with New York Jazz composer, Yumiko Sunami. For the past three years she has been the recipient of the Newcap Radio Award in Music.

She was chosen as a member of the 2008 National Youth Orchestra of Canada, touring Canada and the United States. In 2008, Leanne and the Brass Quintet “senza sordino!” were winners of the CPO’s Concerto Competition, performing in the final concert with the CPO, and as a soloist, won the UofC’s Concerto Competition. Leanne has performed in numerous festivals across North America including the Victoria Music Festival, Festival Nelson, the Kiwanis Music Festival, the Long Island Chamber Music Festival and the Calgary C-Jazz Carnivale.

Leanne is currently completing a Bachelor of Music degree in Performance at the University of Calgary.”