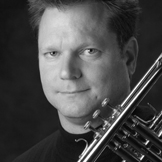 Hailed as one of Canada’s top lead trumpet players, Jim Murray has been actively playing in the professional music scene for 15 years. A relatively “young guy” in the band, Jim began his career playing solo / lead trumpet in A Band of Outriders, a community band which he also assistant directed under Dave Jones. He soon earned himself a place as a substitute in Prime Time Big Band and went on to gain his current position as lead trumpet with the band. With Dave, he has also started a new community band in the city called “Rhythm’s Edge”.

Jim has had the privilege of working with some of the industry’s best including Dominic Spera, Jens Lindemann, Gary Guthman, Greg Bush, Bobby Shew, Chase Sanborn, Dave Jackson and most recently Allen Vizzutti.

Jim adds his talents as lead trumpeter when called upon to many groups and shows in and around Calgary on a regular basis. Some of these include the Eric Friedenberg Big Band and the University of Calgary Jazz Band.

Recently, Jim has had the opportunity to play with some other professional groups in the city. The summer of 2006 saw Jim playing for millions in the world famous Calgary Stampede Grandstand Orchestra alongside another Canadian great, Mike Herriott. This led to a spot as principal trumpet with the Calgary Philharmonic Orchestra for their Pops show, “Gettin’ Dizzy”.

Jim is finding his hard work is paying off as he has recently had a number of calls for recording gigs. His resume includes recordings with the Heebee-Jeebees and most recently a session with Calgary’s own, Jann Arden. Of course you can hear Jim playing lead trumpet on Prime Time’s new album “…for our Friends”.