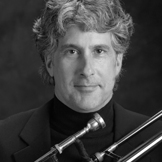 Brian has been freelancing in Calgary since high school. He graduated from the University of Calgary with a B.Sc. degree in 1981. While at U of C, he performed with Dr. Ward Cole’s Saturday Morning Jazz Lab Band. Brian has had the pleasure of private study with Bob Stroup, Ian McDougall, Bill Watrous, Alistair Kay, Bobby Shew, and Bob McChesney.