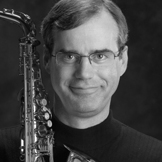 Richard has worked as a professional saxophonist in Calgary for 15 years.  He has performed with many outstanding local groups such as the Prime Time Big Band, Soul Providers, Penguins on Broadway, TR3, Tim Tamashiro Orchestra, Calgary Philharmonic Orchestra, and his own jazz quartet.

Richard’s show experience include Smokey Joe’s Cafe and Damn Yankees at Stage West, Evita at Theatre Calgary as well as No Small Feets and Dancers and other Musical Instruments with Calgary’s DJD.

In addition, this will be his 12th year as part of the Calgary Stampede Grandstand Orchestra. Richard’s playing can be found on the CD’s of Tim Tamashiro, Terrain , Bluesland and The University of Calgary Big Band.