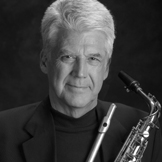 Mr. Friedenberg is an esteemed arranger, composer, and musical director, in addition to being one of Calgary’s most accomplished flute and saxophone players. Eric holds a University of Calgary Bachelor of Music Degree, is a board member of the U of C Alumni Association as well as C of C’s Selection Committee, and has served two terms on the U of C Senate. He is also a Sessional Instructor at U of C, and a faculty member at Mount Royal College.

Eric has served as arranger, conductor, and musical director for various TV shows and special events including “Frank Mills with Toni Tennillen and the opening of the Jack Singer Concert Hall with Jan Arden; as composer and arranger for numerous films and commercials; as musical director for “Unforgettable” in Vancouver; has been involved in many theatre productions such as “Phantom of the Opera; and served as a member of the writing and music team for the 1988 Olympics with musical director Tommy Banks.

Eric has been the bandleader and soloist with Bob Brookmeyer, Dizzy Gillespie, Pepper Adams, Paula Horn and numerous other jazz and music industry greats!