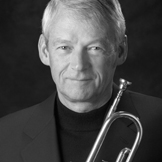 Dave Jones, although retired from the Canadian Military, is presently serving as a reserve band consultant to the Commander of 41 Canadian Brigade Group. He was the Director of “The Band of Outriders of the Calgary Stampede” from 1994 to 2002 and the Director of The Calgary Stetson Show Band from 2000 to 2003. Currently, he is the Director of The University of Calgary “Big Band” and one of Canada’s top big bands “Prime Time Big Band”. Prime Time Big Band is pleased to announce the release of their debut CD “for our Friends”, a collection of Big Band Jazz from the 50’s to the present day and available through www.primetimebigband.com. The big band is performing in their 6th season at The Ironwood Stage and Grill in Calgary, Alberta.