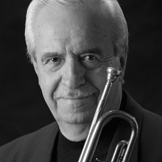 Al’s long involvement with the music business in Western Canada began in Regina where he played with the Regina Symphony. He was assistant Conductor with the Regina City Police Boy’s Band and the Regina Wind Ensemble, and Bandmaster of HMCS Queen Cadet Band.

Al has been a fixture of Calgary’s musical scene since opening a branch of Arcade Music here in 1966. In the 70’s A1 was Music Director for the CBC television show ” On Stage ” and he toured Japan with the Frank Mills Orchestra. He performed with the 1988 Olympic Orchestra under Tommy Banks and toured Hungary, Germany, and Switzerland with the ” New Orleans Connection ” Dixieland Band. He has also performed in many orchestras backing such touring celebrities as Manhattan Transfer, Dizzie Gillespie, Pattie Page, Red Skelton, Paul Anka and Cleo Laine.

He remains active as a performer, clinician and adjudicator. Al is the Music Director for the Calgary Stampede Youth Talent Show, and has been since it began in 1980.